Since my daughters were both involved with sleepovers on Friday night – one at our place, one at a friend’s – we pushed our “movie night” off to Saturday this week.   We included a stop at the library in our Saturday errands, and picked up “Julie & Julia”.  Having read the book, I’d been rather reluctant to watch the film, but multiple friends had insisted I would enjoy it, the girls had actually heard about it from some friends and were therefore gung-ho, and then, of course, it did have the whole Paris connection.   In the spirit of our evening’s theme, I chose a couple of recipes from Around My French Table for dinner:  pork loin with oranges and broth-braised potatoes.  I also decided to see if the girls’ palates were ready to recognize the delights of roasted brussels sprouts. 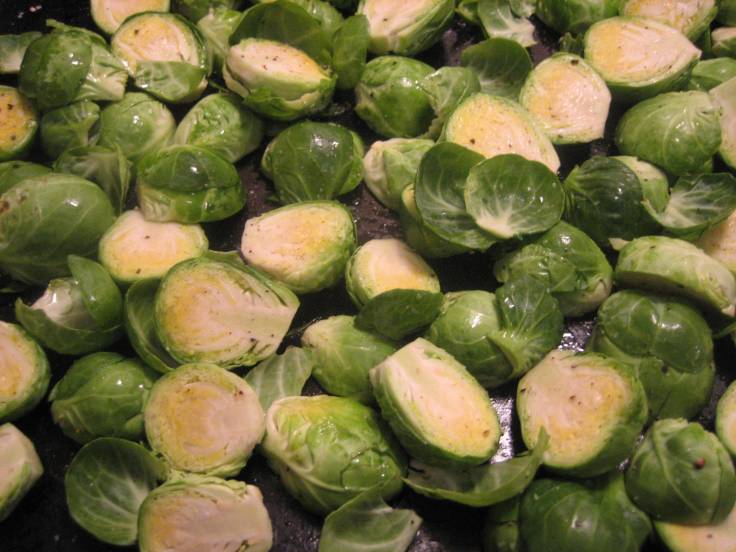 I wish I could report that the pork loin was a hit, but alas I cannot.  I had high hopes, given how beautiful it both looked and smelled as it cooked. 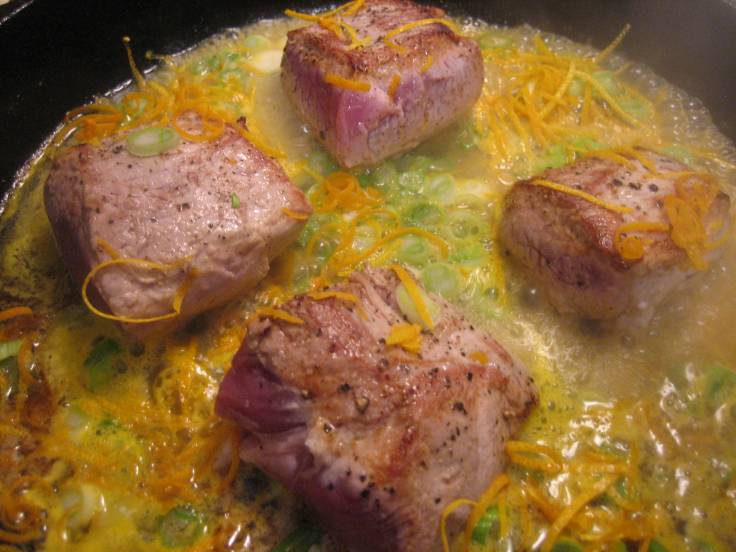 Orange zest, scallions, and cardamom flavored the sauce, but somehow the pork left us all a little unmoved.  It was just okay, not something I can see myself cooking again.  And though I thought the brussels sprouts just grand, my daughters were left cold.  The more apropos word would actually be “offended.”   Thank goodness for the fingerling potatoes and raspberry chocolate chip ice cream that followed later, else my children would have gone to bed hungry.

The movie helped to make up for the disappointing dinner, as well.   We loved the “Julia” scenes!  The glimpses of Paris – restaurants, markets, streets scenes – flamed the anticipation that has been building in our home.  The girls declared that we must visit Shakespeare and Company and E. Dehillerin.  Greta decided it’s time to get serious about learning some French phrases, and spent an hour or so with one of our French textbooks today.  And I found myself captured once again, as I was when I read Julia’s biography, by the story of her life with Paul in Paris and beyond.  The two of them exploring together, eating, cooking, hosting dinner parties, making Valentine cards in the bathtub, and sweet toasts to one another.  He loving her boisterous quirkiness, and she doting on him, and both endlessly encouraging and supportive of one another throughout their lives.  Of course, one can never know the truth of another couple’s relationship, but from what I’ve read, it certainly seems to have been a romance and partnership worthy of admiration.

Let me leave you with this poem, written by Paul Child on the occasion of Julia’s birthday, August 15, 1961:

O Julia, Julia, cook and nifty wench,
Whose unsurpassed quenelles and hot souffles,
Whose English, Norse and German, and whose French,
Are all beyond my piteous powers to praise —
Whose sweetly rounded bottom and whose legs,
Whose gracious face, whose nature temperate,
Are only equalled by her scrambled eggs:

Accept from me, your ever-loving mate,
This acclamation shaped in fourteen lines
Whose inner truth belies its outer sight;
For never were there foods, nor were there wines
Whose flavor equals yours for sheer delight.
O luscious dish! O gustatory pleasure!
You satisfy my taste buds beyond measure. 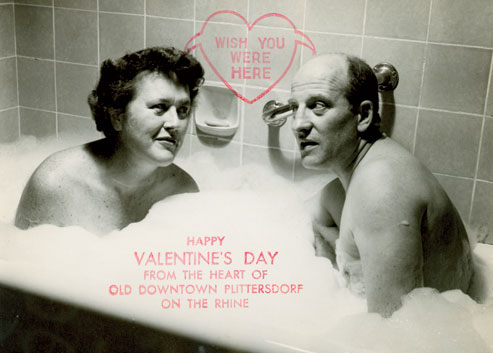 One thought on “French Saturday Night”