Paris, We Miss You!

A week ago last night, we were sitting at the counter at Les Cocottes, and last night we enjoyed those memories over steaming bowls of curried mussels.  (And I’ve not forgotten that I owe you a few more details about that trip.)  We had spent our Saturday consumed with many domestic activities and errands, and I wanted our dinner to be easy and quick but more special than a weeknight dinner.  Flipping open my  now page-stained Around My French Table, I quickly zeroed in on Dorie Greenspan’s recipe for curried mussels.  I also discovered that the Paris establishment, Horse’s Tavern, that inspired this recipe, was right around the corner from the hotel in which we stayed!  Quel dommage!  Adding it to our list.

This was the girls’ first experience and it was most successful.  Not knowing what they were missing, the girls were quite content to sop up the cream-fortified curried broth with a piece of bread rather the crispy pile of salty frites that should have accompanied the dish.  I was less accepting, but kept my complaints to myself.   Expressing her surprise that dinner was ready so quickly, Anna remarked that she didn’t know why people go to fast-food restaurants when they can make such good food at home.  Michael Pollan would be so pleased (as, of course, was this mother.)

We are seated aboard our plane for the flight home. What a terrific time we had! Above you see part of our last Paris lunch, eaten at Les Philosophes in the Marais. Electronic devices must be turned off now, so more sharing must wait. . .

Bonsoir! I write to you as our second night draws to a close. Sitting in the cafe (only WiFi space) of our hotel, the Holiday Inn Notre Dame, a surprisingly terrific hotel, not at all reminiscent of the bare bones Holiday Inns of my youthful memories. We are one block from Saint Michel metro station, but more importantly for the girls, 100 yards from a crêpe stand.

Despite our absolutely perfect dinner at Les Cocottes this evening, which included dessert, the girls were insistent about their need for a pre-sleep beurre sucre crêpe. I found it difficult – ok, impossible – to deny this “request”, for the second night in a row. I’ve also decided that crêpe batter must enter my stateside repertoire.

We ate at Cafe Constant last night, and tonight moved two doors down to Les Cocottes, another Constant establishment. (When I find myself in Paris with an adult companion, I will visit the third, Violon d’Ingres!)

The waiters were terrific, the vibe in the place great, and the food to die for! We sat at the counter, which runs the length of the restaurant, and all had soup to start, though Anna was a latecomer.  She was forced to order once we realized she intended to “sample” our soups to the bottom of the bowls. Greta had cream of pumpkin (creme de potimarron de chataignes) and A and I both had a velouté of celeriac, which included a small piece of turbot. The bowls were practically licked clean.

Next came the cocottes. This is the restaurant’s specialty – dishes served in those fabulous Staub cast-iron covered casseroles called “les cocottes”. The girls shared boeuf Bourguignon and, at the waitress’s recommendation, I had caramelized potatoes stuffed with pied de porc. And how was that? Suffice to say, I eventually had to engage in defensive maneuvers against Anna, who claims this is what she’ll be ordering the next time!

Dessert – chocolate mousse for G, a cream-topped gaufre with chocolate sauce for A, and Basque cheese with a cherry confiture pour moi. 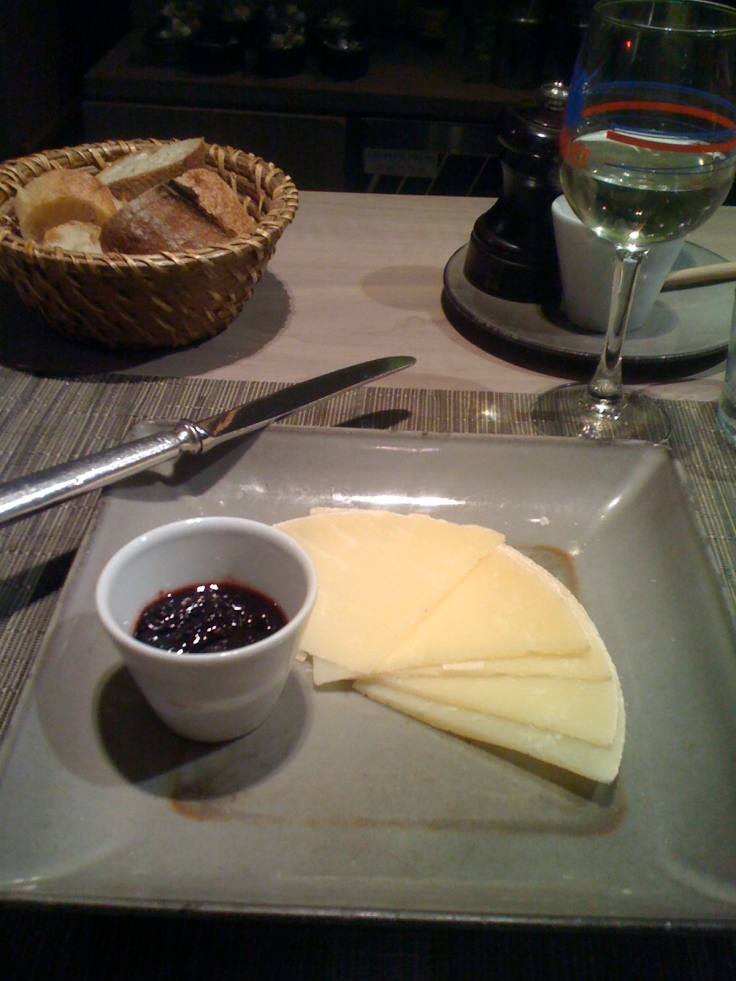 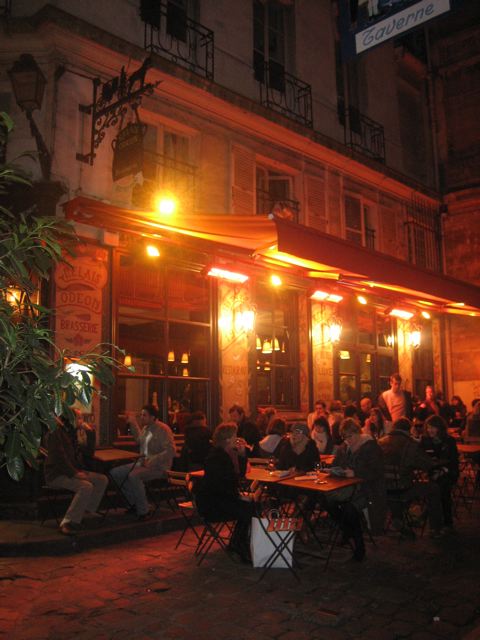 The excitement in our home is at a fever pitch – bags have been packed, restaurants researched, and Euros secured.  Paris here we come!

Our plans include the expected – visits to the Louvre, Notre Dame, the Eiffel Tower, Versailles, and Sacre Coeur.  As you know, we plan to check out Shakespeare & Co. and E. Dehillerin.  We may ice skate at l’Hotel de Ville, but will definitely eat ice cream at Berthillon.  The girls intend to bring home a few French fashion items and I intend to stash in my bag a few jars of Fleur de Sel de Guerande, pails of G. Detou Dijon, and lentils de Puy.  The macarons will be gone before boarding time.

We will (hopefully!) eat at Cafe Constant, Les Cocottes, Les Papilles, Chez Marianne and perhaps Le Gaigne or A La Biche au Bois.  We will eat crepes!  We will buy a Poulet crapaudine from the Chicken Lady at the Bastille market!  And we will wish you were with us!  (You know who you are.)

Next time – posting from Paris!

Since my daughters were both involved with sleepovers on Friday night – one at our place, one at a friend’s – we pushed our “movie night” off to Saturday this week.   We included a stop at the library in our Saturday errands, and picked up “Julie & Julia”.  Having read the book, I’d been rather reluctant to watch the film, but multiple friends had insisted I would enjoy it, the girls had actually heard about it from some friends and were therefore gung-ho, and then, of course, it did have the whole Paris connection.   In the spirit of our evening’s theme, I chose a couple of recipes from Around My French Table for dinner:  pork loin with oranges and broth-braised potatoes.  I also decided to see if the girls’ palates were ready to recognize the delights of roasted brussels sprouts.

I wish I could report that the pork loin was a hit, but alas I cannot.  I had high hopes, given how beautiful it both looked and smelled as it cooked.

Orange zest, scallions, and cardamom flavored the sauce, but somehow the pork left us all a little unmoved.  It was just okay, not something I can see myself cooking again.  And though I thought the brussels sprouts just grand, my daughters were left cold.  The more apropos word would actually be “offended.”   Thank goodness for the fingerling potatoes and raspberry chocolate chip ice cream that followed later, else my children would have gone to bed hungry.

The movie helped to make up for the disappointing dinner, as well.   We loved the “Julia” scenes!  The glimpses of Paris – restaurants, markets, streets scenes – flamed the anticipation that has been building in our home.  The girls declared that we must visit Shakespeare and Company and E. Dehillerin.  Greta decided it’s time to get serious about learning some French phrases, and spent an hour or so with one of our French textbooks today.  And I found myself captured once again, as I was when I read Julia’s biography, by the story of her life with Paul in Paris and beyond.  The two of them exploring together, eating, cooking, hosting dinner parties, making Valentine cards in the bathtub, and sweet toasts to one another.  He loving her boisterous quirkiness, and she doting on him, and both endlessly encouraging and supportive of one another throughout their lives.  Of course, one can never know the truth of another couple’s relationship, but from what I’ve read, it certainly seems to have been a romance and partnership worthy of admiration.

Let me leave you with this poem, written by Paul Child on the occasion of Julia’s birthday, August 15, 1961:

O Julia, Julia, cook and nifty wench,
Whose unsurpassed quenelles and hot souffles,
Whose English, Norse and German, and whose French,
Are all beyond my piteous powers to praise —
Whose sweetly rounded bottom and whose legs,
Whose gracious face, whose nature temperate,
Are only equalled by her scrambled eggs:

Accept from me, your ever-loving mate,
This acclamation shaped in fourteen lines
Whose inner truth belies its outer sight;
For never were there foods, nor were there wines
Whose flavor equals yours for sheer delight.
O luscious dish! O gustatory pleasure!
You satisfy my taste buds beyond measure. 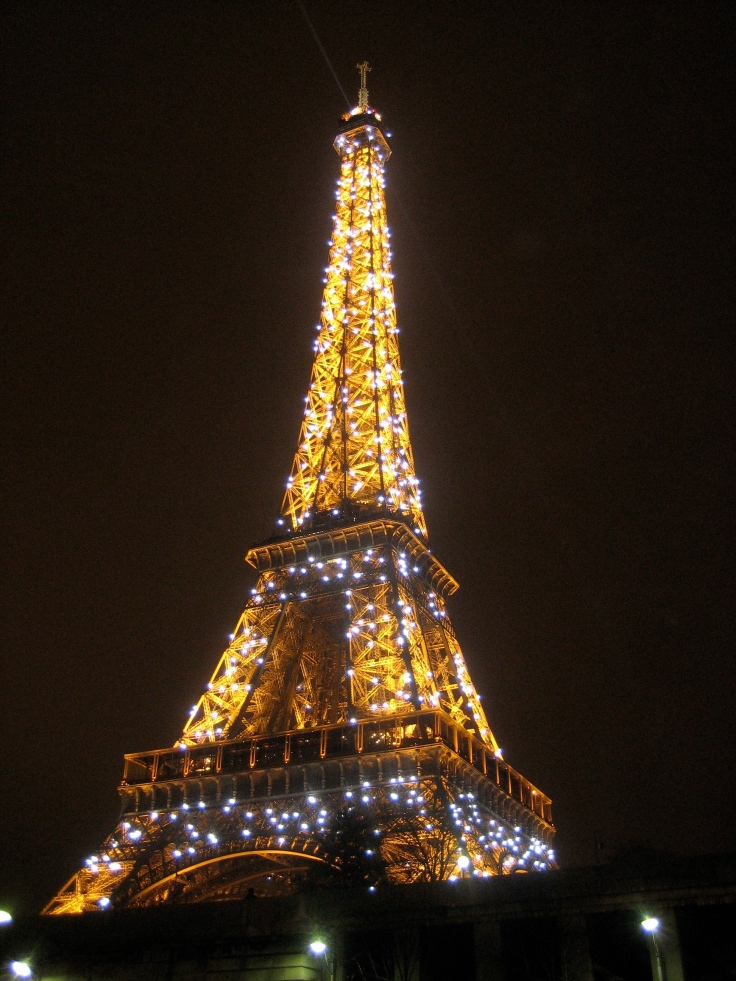 Four short weeks from today, my girls and I will be wandering the streets of Paris!  The winter prices were simply too good to pass up, and so our family Christmas present this year was a long weekend trip to Paris.   For these next few weeks, I’m going to try to focus the blog on all things French.  Beginning with yesterday’s lunch – Paris Mushroom Soup, which just happens to be one of the recipes I’m supposed to cook during January for Dorie Greenspan’s French Fridays group.

It was a bitingly cold day here in northern New Jersey, and in addition to something French, something warm was called for.  The fact that there were mushrooms involved made it an even easier choice, knowing, as I did, that it would be eaten by at least one mushroom lover.  As with most of the other Around My French Table recipes that I’ve tried so far, this one calls for relatively few ingredients (onions, garlic, mushrooms, rosemary, parsley, white wine, and chicken stock) and is prepared easily and quickly.  An extra bonus is the smell that will greet you when you return from running outside to the car, if you have left the soup simmering away on top of the stove in the meantime.  Serve this soup with a crusty peasant bread and a peppery arugula salad, and you (and your guest) will be happy.