Beggar’s Linguine for a Birthday 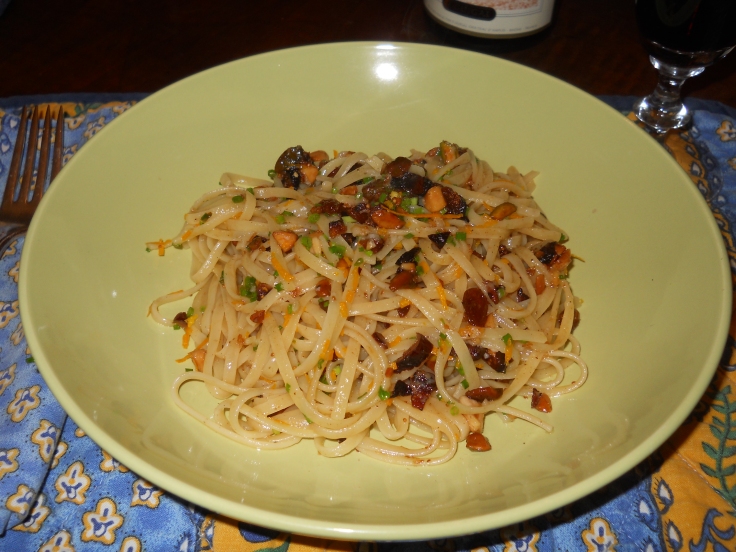 Having been apart on my recent birthday, my daughters informed me that we would celebrate my birthday this evening.  They had a little plan up their sleeves, about which they whispered and plotted with our dear friend and irreplaceable sitter, Beth.  I decided to make my own contribution to the evening by trying out this week’s French Friday recipe, Beggar’s Linguine, or Linguine Mendiant.

Calling for pistachios, almonds, golden raisins, and dried Mission figs, a healthy heap of Parmesan and dusting of orange zest and chopped chives, this is not a recipe that would normally catch my eye – even if the 1 1/2 sticks of butter might!  I simply could not get my mind around what it was going to taste like.  Sweet?  Fruity?  Is that really something we want for dinner?  The raisins alone gave me quite a long moment of pause.   Some readers may recall the dismay I caused at my best friend’s home when I showed up with a dessert containing golden raisins.  And a person with whom I generally share a similarity of taste in all things culinary, made a face bordering on disgust when I suggested we share a cinnamon raisin bagel one recent morning.  Would my daughters and Beth join this group of people offended by the inclusion of raisins in their meals?  (Topic for future blog:  Where to do raisins belong?)  After mulling this all over for a few minutes, I decided, “What the hell!” and made my grocery list.

A little background on where the inspiration for this pasta may have come from.  Dorie Greenspan tells us that there’s a French candy called a mendiant, which comes in the form of a chocolate disc topped with chopped nuts, dried fruit and sometimes a little orange rind.  Traditionally, the nuts and fruits represented the four mendicant monastic orders – dried figs for the Franciscans, raisins for the Dominicans, hazelnuts for the Augustinians, and almonds for Carmelites.  So it seems that someone thought it might be a good idea to apply this idea to a pasta dish and, somewhat surprisingly, it was! 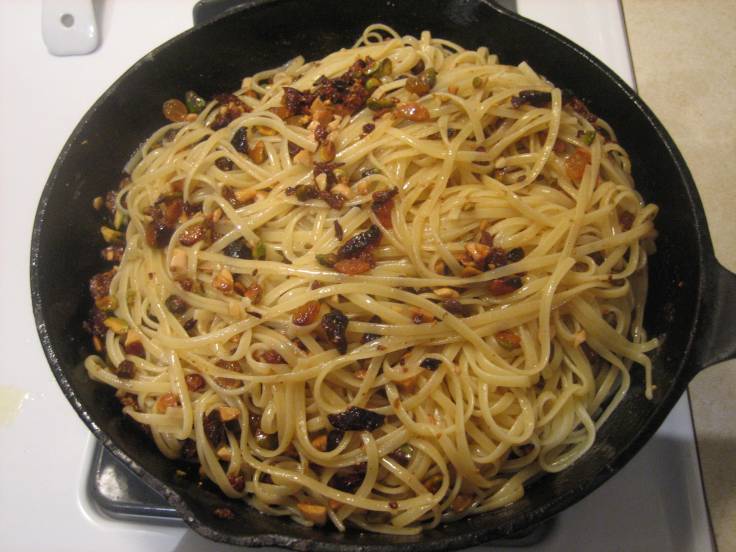 After browning that stick and a half of butter, in go the chopped fruits and nuts, followed by the cooked linguine.  Toss that all around, pour it into a bowl, add a generous heap of Parmesan, little orange zest, and healthy handful of chives, and oh my how happy you will be!   I am, in fact, so certain of this fact that I intend to prepare this dish for each of the aforementioned raisin detractors in the very near future.

Good as this pasta was however, it couldn’t beat dessert – a birthday cake baked, decorated, and served with an abundance of love by my two beautiful daughters.

13 thoughts on “Beggar’s Linguine for a Birthday”